How much do you know about led batten light?

Did you know that the first batten luminaire, with the fluorescent lamp packed inside the box, was marketed over 60 years ago? In those days it had a 37 mm diameter halophosphate lamp (known as a T12) and heavy, transformer type wire-wound control gear. By today’s standards, it would be considered very inefficient.

Some early battens consisted purely of a bare fluorescent tube on a folded white steel spine to which you could add accessories such as a reflector. Nowadays, all LED battens have some kind of integral diffuser and so the luminaires tend to be either IP rated or have a slightly more attractive cover for office and commercial applications. We have reviewed both types.

A conventional 1.2m batten with a single T5 or T8 fluorescent lamp emits about 2,500 lumens and all the LED versions we looked at have a greater output. Most manufacturers offer a standard and high output version, with the higher wattage LED being equivalent to a twin lamp fluorescent.

If you are retrofitting on a one for one basis, decide whether you want a similar or greater illumination level. If you want the same amount of light, you can save energy by using a lower wattage LED version. Remember to compare like with like. A dusty fluorescent luminaire with an old tube might only emit half the light it did when it was new. Don’t compare it with an LED fitting straight out the box.
If, on the other hand, you want greater illumination, you may well be able to achieve it without increasing your energy consumption.

Even with something as simple as a batten, it is worth considering the light distribution. Light isn’t only required on the worktop or desk. Typically, an LED batten emits light over 120 degrees downwards whereas a bare fluorescent lamp would be more like 240 degrees.  or maybe 180 with a diffuser. A wide-angle beam gives you better illumination on people’s faces, shelving and noticeboards – and also more reflections in computer screens!

Some upward light can be desirable to lighten the ceiling and “lift” the appearance of the space. A bare fluorescent lamp gave you all this by default (at the expense of a reduction in horizontal illuminance) but some LED luminaires can have a quite narrow downward distribution which leads to dark walls.
For this reason, literature which tells you the horizontal illuminance compared with a fluorescent batten is of no value unless the beam angle of the LED luminaires is also given.

Finally, check whether you will want to dim the luminaires. Some of the them reviewed here could not be dimmed, as standard. 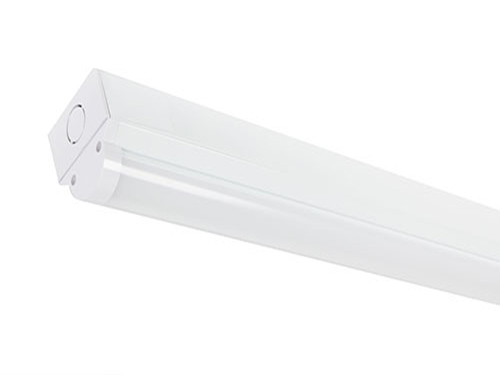 It has a white extruded aluminum body and polycarbonate diffuser which gives it a wide light distribution which is comfortable and easy to look at. It looks just like a fluorescent batten except that it lasts three times as long (a claimed 50,000 hour life L70/B50).

There is a range of On/Off, Microwace motion sensor, CCT tunable, DALI and emergency versions.

This is a compact 40W, 1.2m unit measuring 80 mm wide and projecting 67 mm from the ceiling. The high depth means it has enough depth to accommodate the LED drivers, not to be hidden in end caps.
A really useful feature is that it has a hidden switch so you can choose to have a 3000K, 4000K or 6000K output. It is equally at home in a kitchen, office, factory or garage.

The body is made of white powder-coated aluminium and it has a polycarbonate diffuser. This means it is comfortable to look at from all directions. There is also the option of a microwave movement sensor or with a 3-hour emergency pack. 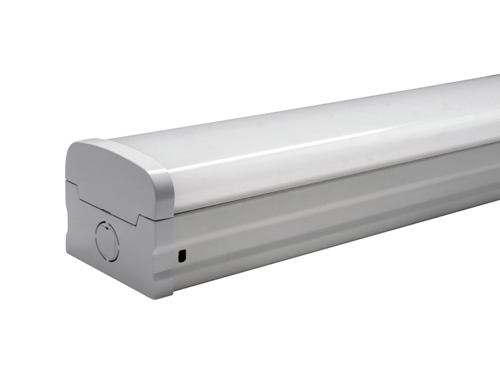