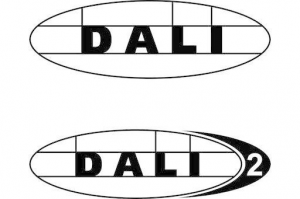 The original DALI (version 1) logo and the newer DALI-2 logo.

Both logos are the property of DiiA. This is the Digital Illumination Interface Alliance, an open, global consortium of lighting companies that aims to grow the market for lighting-control solutions based on digital addressable lighting interface technology.

There is a very wide range of DALI enabled lighting control products available from all the leading manufacturers and it is now widely recognised to be the global standard for lighting control.

DALI, like 1-10V, was designed for and by the lighting industry. Lighting control components, such as LED drivers and sensors, are available from a range of manufacturers that have DALI and 1-10V interfaces. However, that’s where the similarity ends.

The main differences between DALI and 1-10V are:

ARE ALL DALI PRODUCTS COMPATIBLE WITH EACH OTHER?

With the original version of DALI, there were some compatibility problems because the specification was quite limited in scope. Each DALI data frame was just 16-bits (8-bits for the address and 8-bits for the command), so the number of commands available was very limited and there was no collision detection. In consequence, several manufacturers tried to expand its capabilities by making their own additions, resulting in some incompatibilities.

With the advent of DALI-2 this has been overcome.

DALI-2 allows for the use of both DALI-2 and DALI components in a single installation, subject to some restrictions. In practice, this means that DALI LED drivers (as the main example) can be used in a DALI-2 installation.

HOW DOES DALI WORK?